Nashville Golf & Athletic Club may very well have had its beginning in the late 1770's. In the Spring of 1786, Andrew Crockett, an uncle of the famous woodsman, Davy Crockett, unsheathed his broad axe and began the tortuous process of clearing a tiny knoll in the lush countryside of Middle Tennessee. Andrew and his wife Nancy, had just received a land-grant deed to 640 acres and had chosen the site for their new home. It was the 10th year after the War of Independence and the pioneering spirit was flourishing. 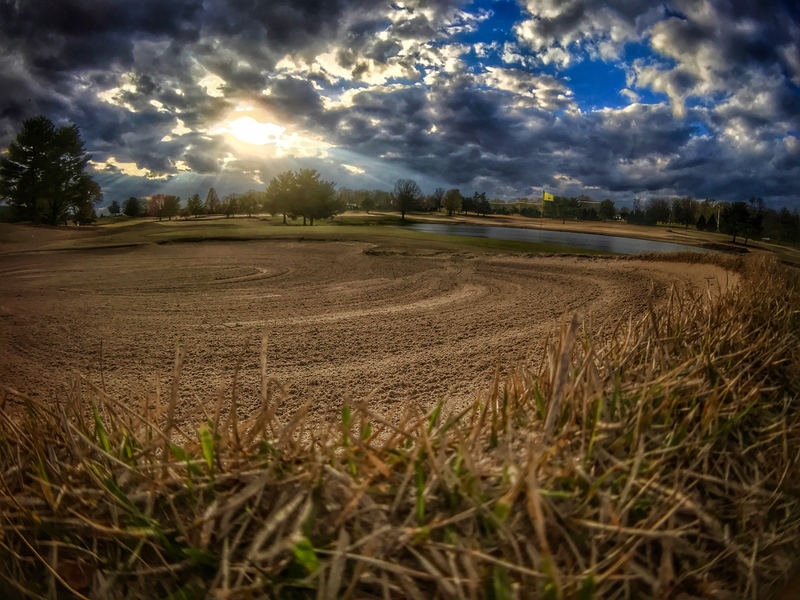 Now, 200 years later, a few of the saplings that covered the Crocketts' knoll have grown to maturity. Their strong, bountiful limbs spread shade across a putting green nestled in front of the centerpiece of Nashville Golf & Athletic Club. One section of that historic structure, where legend says Andrew fought off an Indian attack to protect his family, has been restored as the library of the clubhouse.

Two centuries later, the serenity of the historic clubhouse renovated with antiques gathered on numerous forages through Ireland and Scotland, furnishes the flavor for a demanding 187 acre tract that offers challenges to golfers reminiscent of the intensity and dedication of those early pioneers. One small but evocative link to the past is the small Crockett family cemetery, carefully preserved by the Nashville Golf & Athletic Club.

The NGAC course, featuring a breath-taking panorama of the beautiful countryside and hills of Tennessee, represents a lovely series of opportunities for today's golfers who cross the scene shouldering steel-shafted woods and irons instead of muskets and arrows. The flexibility of the challenge is apparent. Each of the bent-grass greens was designed specifically for the hole in play. No two putting surfaces or contours are similar. Through the placement of four sets of tees, the course can be an entertaining 6,340-yard "member trip" (5,121 yards for women members) or stretched to a demanding 7,440 yards in which the sleeping giant is awakened and all 76 bunkers figure prominently in the par 72 journey. The thrill of a well-struck shot is rewarded. The poorly-played stroke is costly. But, in either case, replaying the round is enhanced by the time-honored atmosphere of the game with the clubhouse surroundings in the tradition of the "Honorable Company of Edinburgh Golfers". The mood here is strictly golf.

The sheer beauty of the 187-acre course is highlighted by the numerous views of the rolling countryside. Fairways are separate and apart and totally without interference to another hole. From several of the elevated tees, miles and miles of unobstructed scenery is afforded.

During the 1880's when the "New York Apple Tree" gang was pioneering golf in this country, the South was giving birth to fox hunting. Riding to the hounds on horseback over rail fences and the rolling hills became the convivial pastime. Succeeding Masters of the Hounds continued to cast the hounds over this very site with the sound of the hunting horns echoing across the hills until construction of the course began. The "Big Spring" that is the source of water supply for the course lakes was the favorite gathering place after the hunt.

The course has those primary elements that are characteristic of the great golf courses of the world, not just one or two good demanding golf holes, but a series of 3 or 4 great holes. The first six holes of this course are honorable and "a bit of all right."

All golf courses of merit and all outstanding golf holes have one thing in common, they look absolutely natural, as if the terrain had always been that way, waiting to be discovered for golf.

As golf courses go, the 32-year old NGAC is relatively young. But, scarcely had the construction scars healed when "Sports Illustrated" recognized the 165-yard, Par 3, 6th hole as something special. The national magazine sent its photographer to the elevated tee to capture the breathtaking scene of the star-shaped, trap-infested, putting surface labeled among the "Most Beautiful, 18 Golf Holes in America!"

As your round progresses, you soon realize that there is not a "let up" hole in sight. The result of a shot not properly struck is ponderous, evidence that distance and direction are critical for the approach to each green.

Back to Top
Please enable JS